Day 1 Thursday â€“ As the last few teams arrived in beautiful Spain, we met at the Si! Restaurant for a meet and greet with all teams in their LMS Kit team shirts. Best dressed went to South West Bandits in their brand new matching â€˜Runway Green & Yellowâ€™. 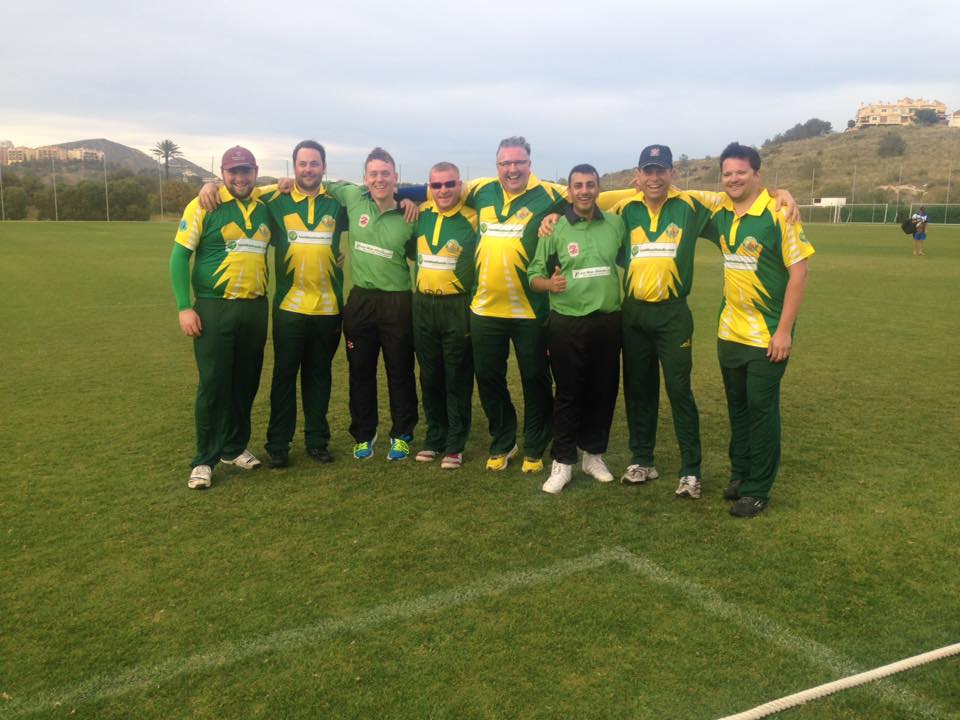 Was a beautiful day in La Manga as all of the teams arrived for the first matches. 8 matches were played on the first day with victories to FJT Stallions, The Crab CC, Bar Field Sobers, Uncle Charlie and Project Inzi. Notable performances included: 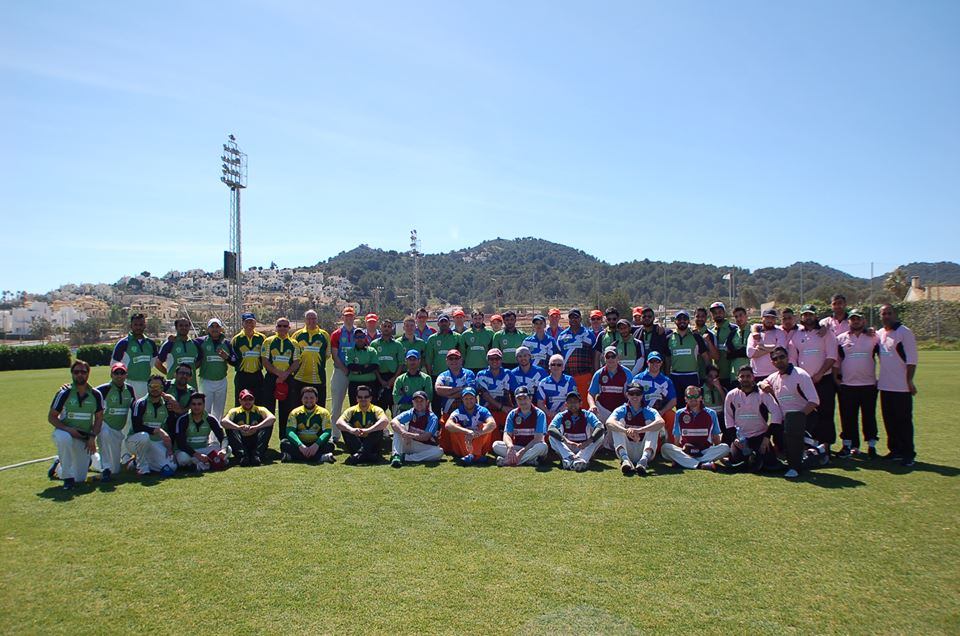 The final group matches were played on Saturday Â with FJT Stallions, Her Majestyâ€™s 8, Team Redbridge and Bar Field Sobers recording victories. South West Bandits couldnâ€™t quite get the job done against HM8, which left them the only team without a win. The best performances of the day were: 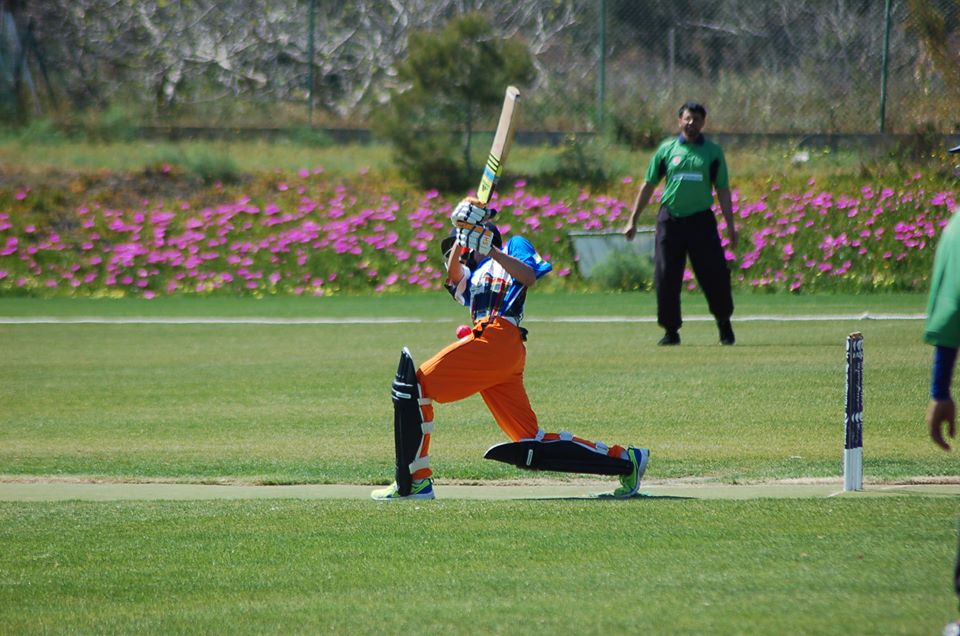 Following the end of the group matches, Barfield Sobers and FJT Stallions topped the groups, with Uncle Charlie and Team Redbridge also qualifying for the Cup semi-finals. The semi-finalists for the Plate competition were HM8, Project Inzi, South West Bandits and The Crab CC.

The early semi-finals saw Team Redbridge play FJT Stallions in the Cup competition and HM8 vs The Crab in the Plate. FJT knocked up 143 off their 20 overs batting first with lots of individual contributions. Team Redbridge could only manage 119, despite 62* off 43 balls from Matthew Tigg, with star performances from FJTâ€™s Farhan Ejaz (3/19 off 4 Overs). HM8 battled The Crab in the 1stÂ Plate semi-final, with some great all-round performances from Ibrhar Khan, Aumer Ali and Ayaz Alam helping them get up over The Crab, who were led by 61 off 46 from Steve Hutchinson and 3 wickets to Chris Siddall.

In the 2ndÂ semi-final, Bar Field Sobers tackled Uncle Charlie in the Cup. Uncle Charlie got off to a cracking start setting a target of 160, after 50* off 21 from Neil Robertson and 53* off 41 from David Gallimore. In reply, Bar Field Sobers fell behind early and couldnâ€™t recover finishing with 124 off their 20 overs. In the Plate semi-final, South West Bandits went down to Project Inzi by 16 runs, with 1 fantastic performance from each team. 78* off 67 Balls from Aadil Khan from Project Inzi and a superb 4 overs, 3 wickets for 12 runs from the Banditsâ€™ skipper Lee â€˜Lipstickâ€™ Nessling.

The Plate final saw Project Inzi (Yorkshire) take on Her Majestyâ€™s 8 (London). Project Inzi batted first and the top 7 all got going without producing any scores above 21. They eventually finished on 112 after 20 overs. In response, HM8 probably put together their best batting performance of the competition, a super 51* off 33 balls from Ibrhar Khan getting them to 112 for 2 after 14.2 overs. Player of the match went to Ibrhar Khan.

The Final of the LMS European Open, was a battle between the favourites FJT Stallions and the surprise packets Uncle Charlie. Uncle Charlie won the toss and batted first, player of the tournament Neil Robertson, managing a top score of 36 of 27 as Charlie lost regular wickets to get to 122 all-out with 2 balls remaining. Tanweer Sikandar was the pick of the bowlers with 3/19 off 3.3. In reply, a blistering partnership between Tanweer Sikandar (51* off 29) and Imran Qadir (30 off 29) had the Stallions in prime position. A mini-collapse applied the brakes somewhat but some cool heads saw them home off 16.4 overs. Player of the Final was Tanweer Sikandar for his great knock and some tight bowling. 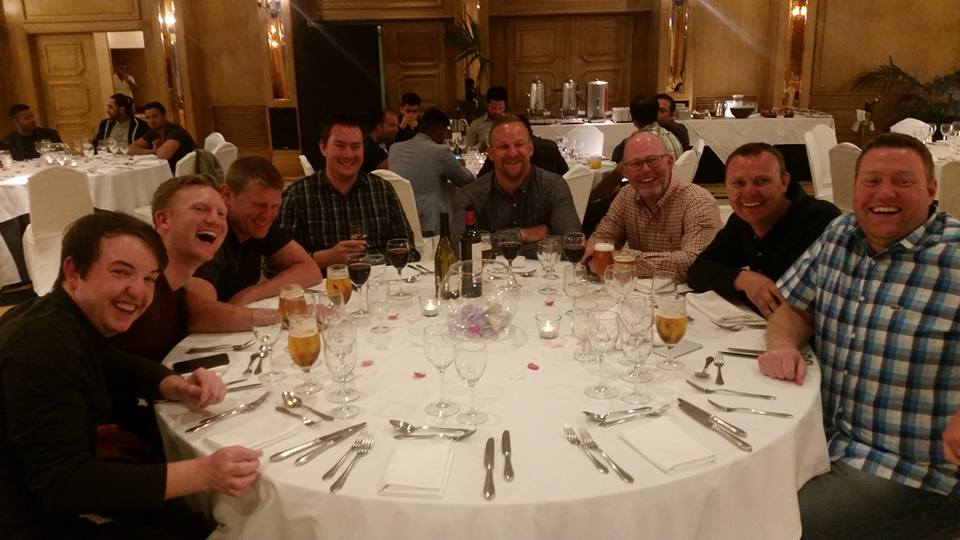 Overall the event was a fantastic success, with great cricket, fantastic weather, an amazing setting and a superb time had by all involved. If anyone wishes to find out about more LMS Tours, the next ones will be Nottingham Open, Bath Open, British Open in May. For all other Tours please see the websiteÂ www.LastManStands.com/Tours.

Iâ€™d personally like to thank everyone for attending. I had a fantastic time and I hope everyone else felt the same. Look forward to growing into an even bigger event next year. 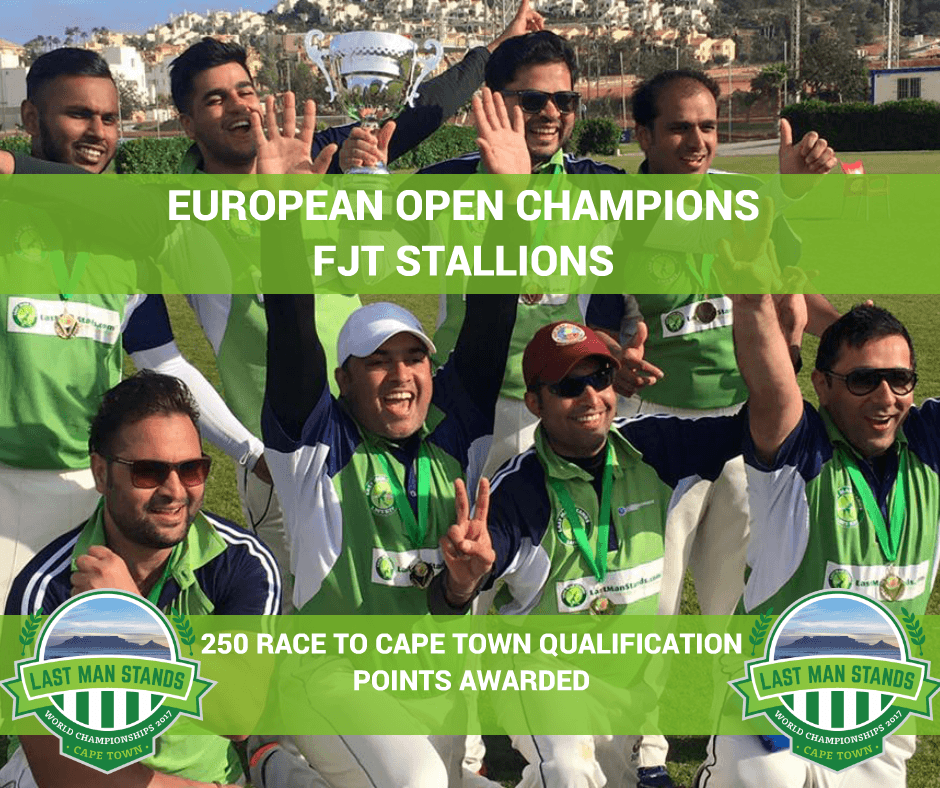 Special thanks goes out to all the sides that made the event such a success, La Manga Club and the Tournament Director Simon Melberzs.