The 2013 Last Man Stands (LMS) World Championships took place back where the world's widest reaching cricket comp all started, in London, England. Coinciding with the end of another Ashes summer, it was the perfect time for LMS players from around the world to converge on the home of cricket to take part. The foreign sides didn't disappoint with all national champions in attendance, plus a host of other teams traveling in from as far away as Australia and South Africa to take part. Check out the clip below for some classic memories of the tournament:Â

The opening day was a cracker of a summer's day at Lord's, with some much anticipated games finally taking place. The 2012 World Champions, Kings VIII (from Johannesburg, South Africa), were given early notice of the huge task they faced in defending their trophy overseas, as the New Zealand champions, CricHQ, saw them off in a high-scoring match to open the tournament. Then the two charity matches took place, with the Alex Township Chiefs (from the impoverished Johannesburg township of Alexandra) taking the field against a LMS All Stars side, and the Maasai Cricket Warriors then putting a bit of colour into the mix as they donned their traditional attire to take on another charity side. Thanks to all those who generously bid to support these two great cricket sides (for some awesome pics of the Maasai Warriors in LMS action at Lord's check out this link)! Finally, it was an Ashes battle between The 2nd XI (Australian Champions) and Abhy's Diner (UK Champions), and the English side welcomed the Aussies to the home of cricket with a dominant display with the bat as they cruised to an impressive win! Â

For highlights of all the Lord's matches and the rest of the World Championships, check out:

Once the opening day festivities were completed it was down to the serious business at the Dulwich cricket grounds in South London. In a little more than a week of epic T20 cricket, 48 teams entered the main event, a further 18 participated in the Happy Hitters, and no fewer than 700 LMS players were in action across 10 fields in 150 matches!!

The Alex Township Chiefs (a charity side from an impoverished township in Johannesburg - one of the two African sides that received funding for their trip) won many admirers with many top performances before they finally fell one stage short of the Lord's finals' day. GreenÂ Zone (from Sydney, Australia) also performed admirably and similarly fell just short. The South African side, Futura Sports Agency, looked like a hot bet early on the tournament, and won many fans both on and off the pitch before they fell to AZÂ Sports one step before finals' day, while Yorkshire's Kahuta Kings also enjoyed a fine run seeing off Sydney champions, Orange Bommies, on route to falling at a similarly late stage.

The Happy Hitters saw NBW's (from Johannesburg) defend the title they had won in Cape Town 18 months previously, and their raucous displays in the bar after games meant that they were popular winners of the title again when they saw off London side, SpinOffs, eventually in the final of the more social event. For a clip of the teams' own experience/memories of their successful tour, check out this link!Â 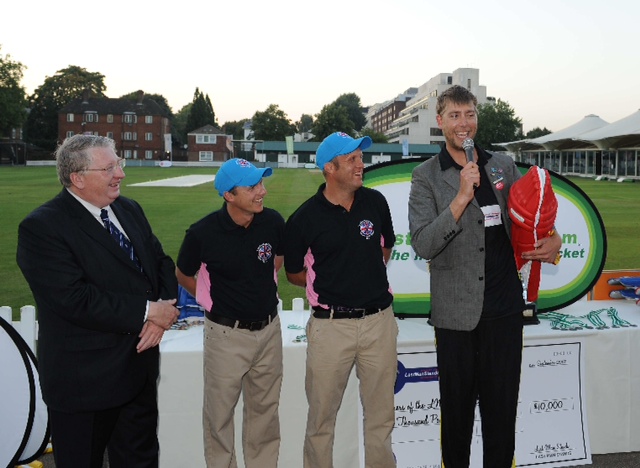 THE CUP OF NATIONS

The inaugural LMS Cup of Nations took place alongside the main event, and featured 11 different nationality teams competing for a spot in the Finals day charity match at Lord's. These nationality games featured top players (both from inside and outside LMS) representing their countries, and nearly all the top players at the tournament had a crack for their country.

West Indies won all the admirers early on with some tremendous power hitting and they looked to be favourites before coming up just short against an inspired Bangladesh side in the semi final. Australia's side (featuring a side made up of a wealth of LMS experience including players such as Lydon Gibbons, Sam Lang and Sam Webber) had served early notice of their potential with a massive win over England (watch this video for some cracking highlights) before cruising through the knockout stages. However, they were pushed early by Bangladesh in the final but battled back to boast a competitive score on a difficult pitch. A great effort in the field then restricted the Bangladeshis to book the Aussies a spot in the charity game at Lord's on finals' day! Â 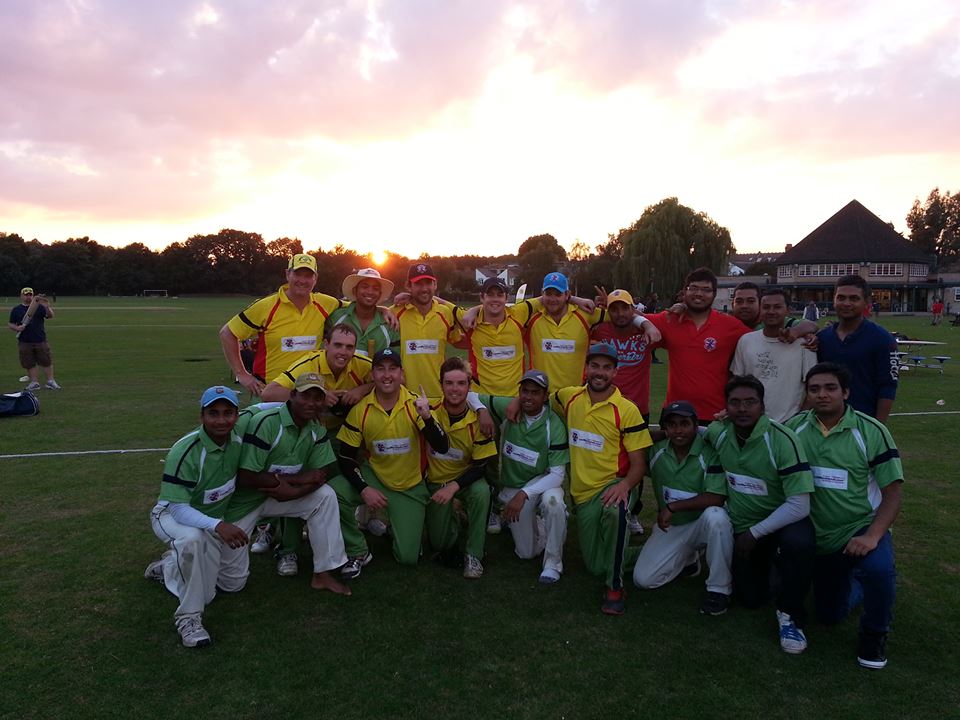 Semi Final 1:Â 3 Short (Canberra, Australia) 166-5 lost to Team Manchester (Manchester, England) 168-1 by 7 wickets:Â Some serious talent was on display from the English teams, as 3 Short discovered in the first semi as a hard-hitting Team Manchester batting line up made light work of 3 Short's first innings' total of 166. The mercurial Lydon Gibbons had given the Australian side some hope with a 27-ball 50 while Sam Lang chipped in with a useful quickfire 38 late on, but Anwar Haq was the pick of the English bowlers with 4-2-24, great figures on a high scoring ground, as the Canberra champions posted a below-par score of 166 in the first innings. Both Team Manchester openers, Yousuf Anwar and Kamran Younas, then posted rapid fifties as Team Manchester made it one better than Cape Town last year as they reached the WorldÂ Champs final with 3 overs to spare!

Semi Final 2:Â AZÂ Sports (Guildford, England) 206-7 defeated Abhy's Diner (Yorkshire, England) 182-6 by 24 runs: AZ Sports then contested a high-scoring affair with Abhy's Diner and saw off their English counterparts in the second semi final. AZÂ Sports batted first and got out the blocks quickly before being slowed by quick wickets. Abhy's Diner kept on chipping away with the wickets, but Tanveer Skiander refused to give in as the Last Man Standing eventually ended up with a match winning innings of 73 not out off 34 balls to set an imposing total of 206 for the 2012 English Champions to chase. Aamar Sajjad got Abhy's Diner off to the perfect start in reply as he hit a fifty, but tremendous tight bowling from Ali Khan and Ahmed Khawaja (combined figures of 7-3-38) put the brakes on the innings, and an unbeaten innings of 56 from Shazad Ahmed was not enough to prevent AZ Sports from comfortably cruising through to a blockbuster showdown in the final between undoubtedly the best two teams from the tournament.

The curtain raiser before the 2013 World Champs Final then took place with a Charity Match (in aid of the fantastic work done in Africa by Cricket Without Boundaries) pitting the Cup of Nations' winners, Australia, taking on the Cricket Without Boundaries team (which featured Aaron Johnson, one of the big-hitting West Indies side, Jason Lacon-Allin (from Durban, South Africa, Jason amazingly hit close to 400 runs in the tournament!), Aliya Bauer (whose wonderful work has done so much for the Maasai Cricket Warriors), Innocent Rabakali from the Alex Township Chiefs (many thanks to 3 Short for their generous bid to allow Innocent a place in the team), plus Nathan Dale, Wayne Greve, Rob Stevenson and Ross Cawood (who all bid generously for their chance to play at Lord's in this great game). Some big hits all round (particularly from Lydon Gibbons, Jason Lacon-Allin and Aaron Johnson) made for an entertaining curtain-raiser to the final as the Charity 8 eventually overcame the Australians, in a match that really showcased the Spirit of Cricket, both on and off the field. Â

WORLD CHAMPS 2013 GRAND FINAL:Â TEAM MANCHESTER (200-7) DEFEATED BY AZ SPORTS (201-7) BY 1 WICKET:Â Then it was the main event, the World Championship final of 2013, which featured former English Champions (and the 2012 World Champs semi-finalists), Team Manchester, up against AZ Sports, who had battered every side that came they way in a dominant tournament to date. It was a matchup between two fantastic LMS sides on the top of their game!

Team Manchester batted first and opener Yousuf Anwar got them off to a good start with 49 off 21 balls. However, two relatively quick wickets fell the other end with LMS legend Imran Mirza getting out to a first ball duck. Ali Azmat played a fantastic innings to keep the Team Manchester ship on course with an unbeaten 67 off 33 balls while Anwar Haq chipped in with a quickfire lower-order 40 to ensure the north-English side reached the strong milestone of 200 off their 20 overs. Tanveer Skiander enjoyed the best success of the AZÂ Sports bowlers, picking up 2 for 31 from his 4 overs.

AZÂ Sports then got off to the worst possible start losing Ali Khan to a golden duck on the first ball of their innings. However, no.3 Shahid Yousuf put his side back on track with a solid innings. Every other AZÂ Sports batsmen kept on contributing, including a brilliant 6-ball visit to the crease for 24 by Salman Qadir, but the Team Manchester bowlers refused to drop their heads and kept on chipping away with wickets. Mohammed Ali drew the most blood with a fine spell of 3 for 21, while Kamran Younus kept the pressure on with a tight four-over spell. Eventually, there was a huge cheer from the crowd as the match came to a knife-edge with Shahid Yousuf at the crease as the last man standing. One wicket and Team Manchester would be World Champions, but Yousuf kept his composure under extraordinary pressure and saw AZÂ Sports over the line with two balls to spare!Â A truly fitting, classic LMS final at the home of cricket! 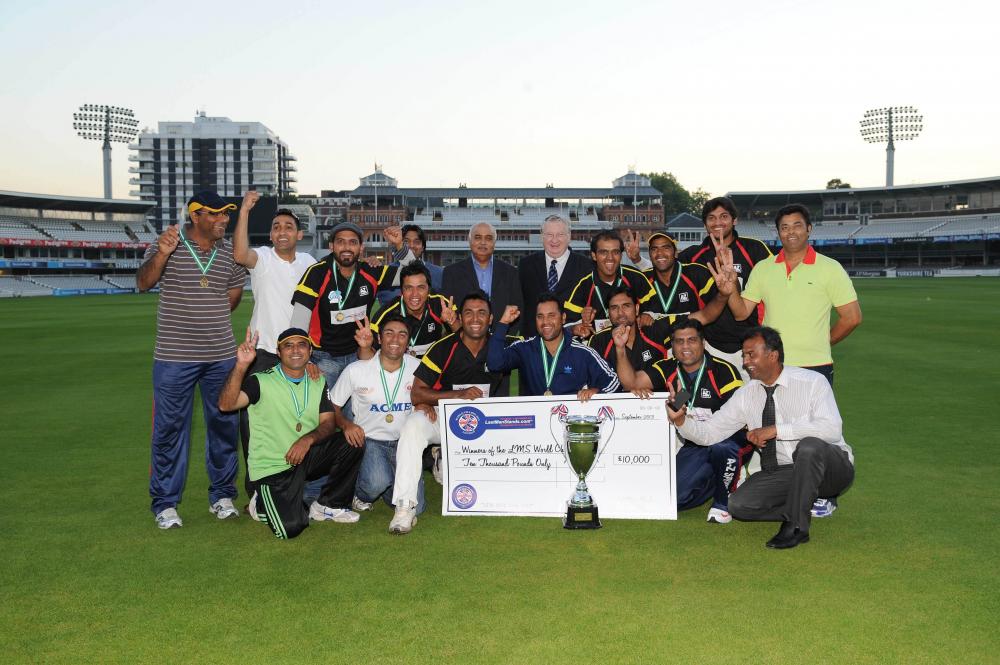 Congratulations to AZÂ Sports, the 2013 LMSÂ World Champions, who won further fans by generously donating 1000 pounds of their winnings to charity, plus 200 pounds more to the bar to keep the rest of the thirsty LMS supporters happy. Well done to all the other teams that travelled from all over the world to make it a fabulous event, and we look forward to seeing you all at the next World Championships in 2015!! Don't forget to vote on facebook (see below) for where you want that tournament to be held!Â

Â Â Â Â LMS caters for players and teams of all abilities. Register today in links below!