Mephobia batted first and scored 125, which including a stunning home run 12 off last ball of innings from Lysle Turner, who contributed a brilliant 61 off 41 balls against a disciplined bowling line up, backed up by astute field placement by Stef Nelson, the Kings VIII skipper. Kings VIII went into bat and were 90 for 5 with George Wolhuter (player of the tournament) in the bank, retired on 50 off 39. The number 7 and 8 batting combination of Ian Nel and Ryno Roets held nerve to take the team home and the trophy! 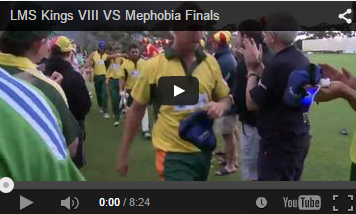 The ¼ final draw was based on the World Rankings of the teams after the Last16 games were completed which produced the interesting line up below & some thrilling cricket matches.

When initially deciding on the location and date of the 2012 LMS World Champs, a concerted was made to host it at the right time of the year so as to avoid the infamous Cape Town rain. We looked into previous years€™ reports, and based on the local€™s advice it was decided that early April would be near perfect weather not too hot or cold, with little chance of rain. Upon arrival a new set of locals supplied very different information advising that April was €œalways rainy€, much to our dismay. Luckily it only rained the day before on Friday 30th March which cancelled most of the warm up games, and led to some last minute schedule changes for the opening weekend€™s play. A torrential down pour was predicted for the scheduled finals day of the 7th April, which left us with no choice, but to bring the finals forward a day to Friday 6th April 2012. A massive thanks to all the teams involved for their understanding & eagerness to get the games in at the last minute schedule changes. 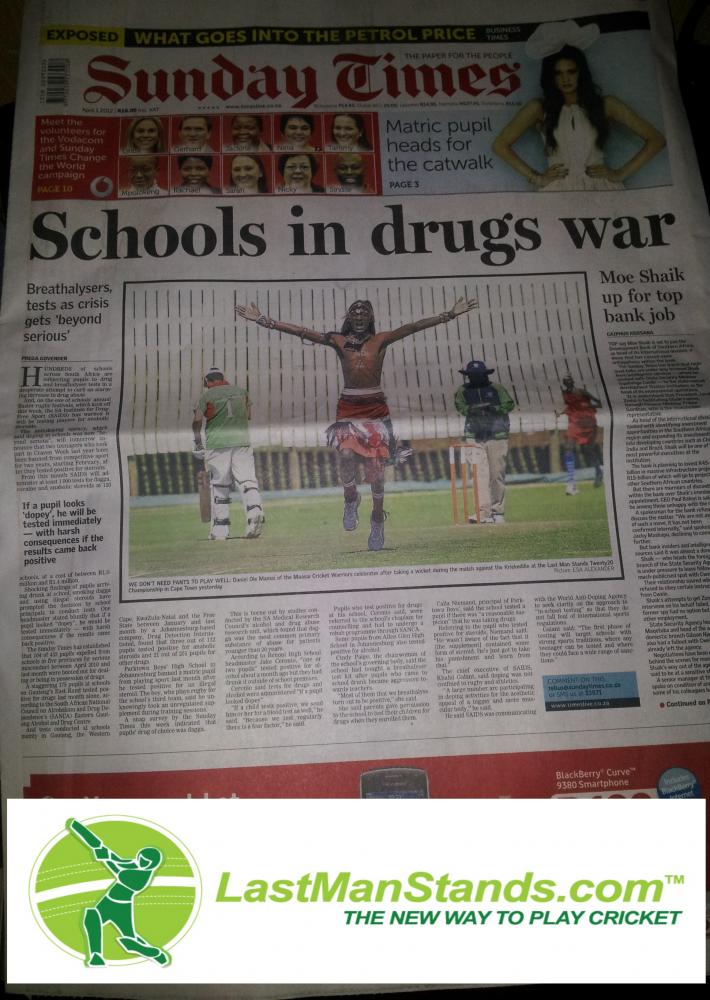 Most of the games were played on the three stunning fields that Western Province Cricket Club provided, with Table Mountain as the setting in the background, undoubtedly one of the most beautiful sports clubs in the world, with facilities to match! The club borders on the Rondebosch High School, which allowed us on occasion to have six fields running concurrently at one venue. When we were unable to make use of the extra fields at RHS, we were able to make use of another top venue in the heart of Newlands, The Vineyards Oval. 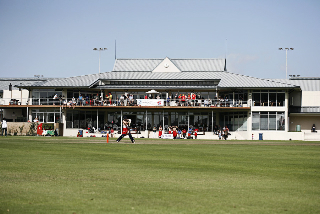 All the pools were comprised of teams from outside of Cape Town, (except Pool G which was comprised of only Cape Town based teams), this was a massive effort in planning, logistics and expense for the players and team organisers€™ travelling down to the beautiful Cape. Teams travelled down 16 hours by bus from Pretoria North, Centurion, Johannesburg, Krugersdorp & the Vaal Triangle. As well as teams flying in from the UK, Kenya, Dubai and all the way in from Australia, really was impressive for amateur cricket teams! This surely is a great achievement and a high note for grass roots cricket and LastManStands.

The World Champs main event pool games were immensely competitive, and saw some big names not make it through (Tradies you can€™t trust the Australian Champions, The Real Chokers who beat Mephobia in the pool games, BBFL & Barbarians). It also produced 7 definite favourites for the K.O. rounds of the tournament with the following teams winning their pools:

Outside favourites were Dessert Warriors from Dubai, Yorkshire Puddings from Yorkshire, and The Strugglers from Australia, who all made it through with good performances in the pool rounds.

The Last16 Knock Out rounds, provided an excellent standard of cricket as well as some major upsets, that saw Team Blazers, HMT Titans and Khayalitsha Cricket Club exit early after dominating their pool games. Such is the nature of knock out cricket!

The ¼ final draw was based on the World Rankings of the teams after the Last16 games were completed which produced the interesting line up below & some thrilling cricket matches. Dubai's Dessert Warriors went down to the big-hitting South African champs, Rebels, while the Yorkshire Puddings - from Ossett in North England - met that match as world champs Mephobia put in a fine all round display. Team Manchester were pushed hard by Wyobi Wicket Warriors but eventually emerged 14-run victors, while Kings VIII completed the semi final line up with an 18 run win over CEVA Crusaders.

The first semi-final saw English champions and tournament favourites, Team Manchester, take on Kings VIII. Kings batted first and their top order fired as they posted an intimidating total of 166 on the main oval, thanks to 50s from George Wolhuter and Stefan Nelson. However, Team Manchester came out with all guns blazing and Waqas Ahmed's quickfire 35 along with highly-ranked Imran Mirza's 45 put them in a dominant position in the closing stages. With only 12 required from the final 9 balls, Kings kept the pressure on and took late wickets to deny the English champions and book their place in the 2012 World Champs final.

The second semi-final proved to be a masterclass by reigning world champions, Mephobia, as they booked their place in a second successive World Champs final, having dominated the opposition in Queensland, Australia, on route to glory in 2010. Michael Botha saved the Mephobia batting line up in the first innings as his 52 from 25 balls at number 5 ensured a competitive total of 144 - a score that looked far away in the early stages of their innings. Daniel Brits then shone with the ball as his 4 wickets helped to tear through the big-hitting batting line up of the South African champs, Rebels, who were eventually bundled out for 84 in the 18th over.
In the final, Mephobia batted first and scored 125, which including a stunning home run 12 off last ball of innings from Lysle Turner, who contributed a brilliant 61 off 41 balls against a disciplined bowling line up, backed up by astute field placement by Stef Nelson, the Kings VIII skipper. Lysle held his nerve and patience throughout the innings to eventually let loose in the final three overs and help set a competitive total. Ryno Roets was the pick of the Kings bowlers with a fine bowling display which included two wickets. Kings VIII went into bat and were 90 for 5 with George Wolhuter (player of the tournament) in the bank, retired on 50 off 39. The match was in the balance with 13 overs of the second innings but the number 7 and 8 batting combination of Ian Nel and Ryno Roets held nerve to take their team home and the trophy! 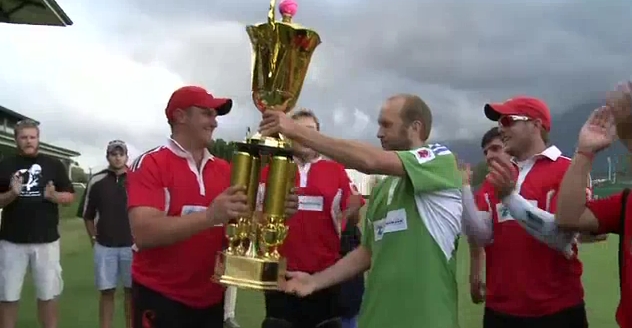 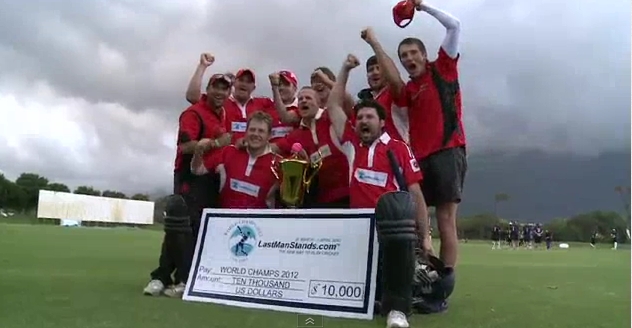 The player of the tournament was George Wolhuter who won a LastManStands Viper Cricket Bat.

The World Champs Dream Team  was made up of the following. These guys would definitely have a bright future, and could be playing professional cricket one of these days with hard work.

The Happy Hitters was a new event not previously seen at LMS World Champs, and proved to be a massive success, with 15 teams taking part and having fun on and off the field.

*Points for the groups above include points gained from the KO rounds.

NBW€™s were led by Bruce Turvey to victory without losing a match! Chris Botha was named man of the match & tournament and won a LastManStands Viper Cricket Bat. 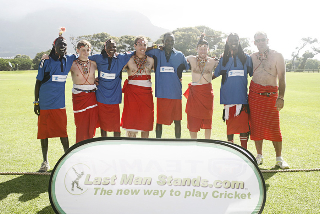 For an Australian national TV news story on the Maasai Cricket Warriors' trip to the World Championships, check out this link - ABC Lateline: Maasai Warriors take to the cricket pitch

The Plate Championship saw one of the most popular teams of the tournament make amends for the early exit from the World Champs, tradies you cant trust, and take the title. The Tradies had been in fine form back in September 2011 on their march to winning the Australian National Championships. However, they found it hard to adjust to the Cape Town cricket pitches in the pool stage (although they adjusted very quickly to the bar scene), and they exited at the first time of asking. However, the Aussie (and Kiwi) lads kept their spirits up and bounced back to secure some consolation silverware as they won the plate tournament! Lydon Gibbons, one of the world's top-ranked batsmen, justified his reputation with a series of big-hitting displays during the tournament.

A massive thanks to all the umpires, officials, and the players€™ that helped umpire, input stats, put up/put down branding and more etc.As well as the Western Province Cricket Club's ground staff! There were over 100 games that took place over the week of play!