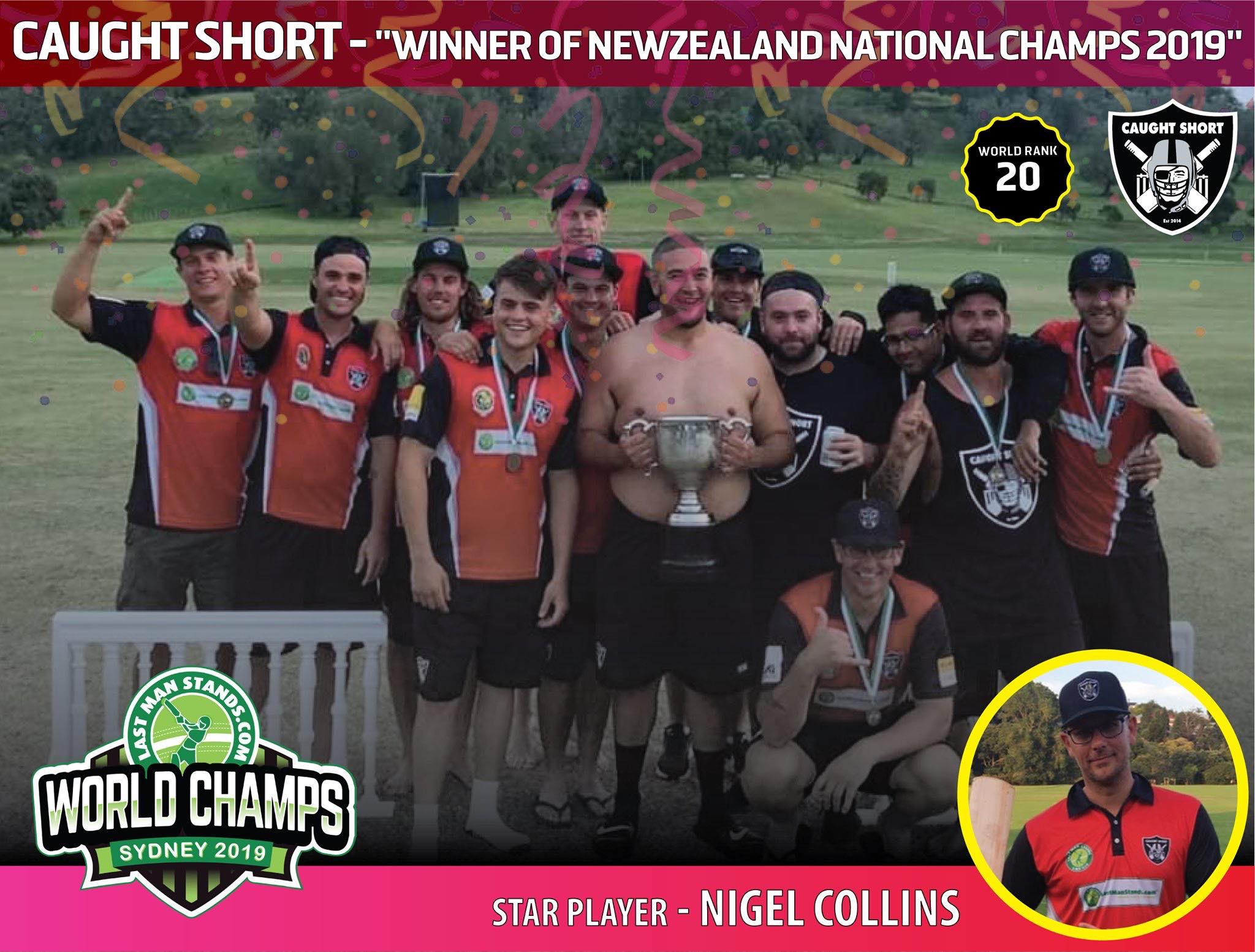 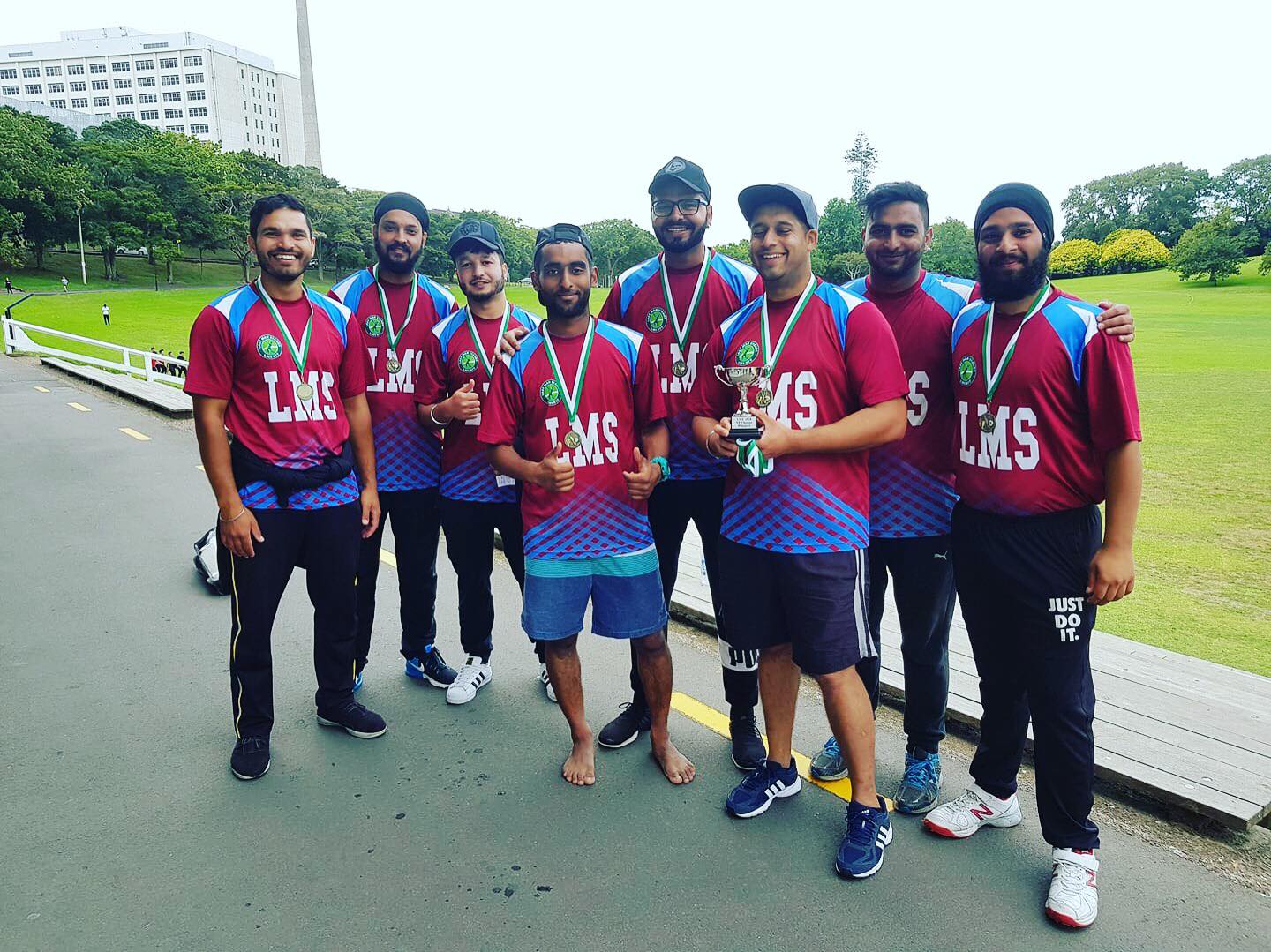 Also well done to the Ball Busters from the North Shore who were the runners up. It was a well represented event with 12 teams taking part and camps from Wellington (Backboneless) and Chch (Ranchsliders) represented.

See footage of the games on Facebook , scorecards & tournament rankings below. 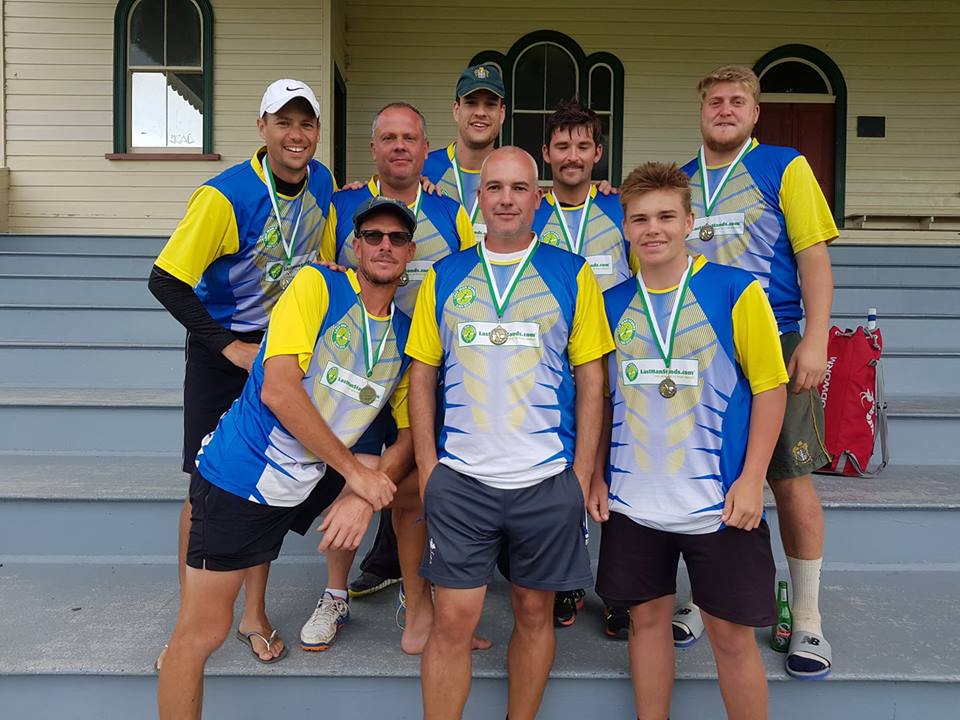 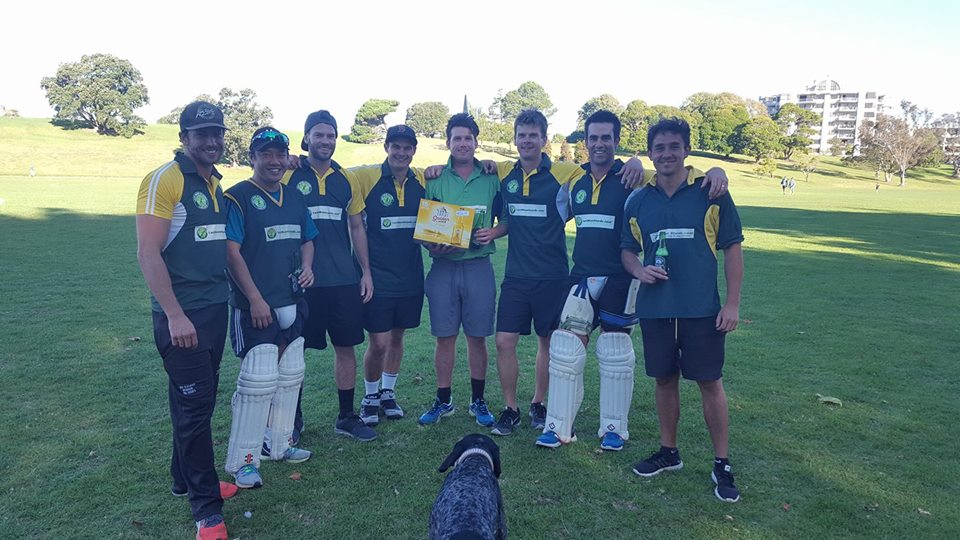 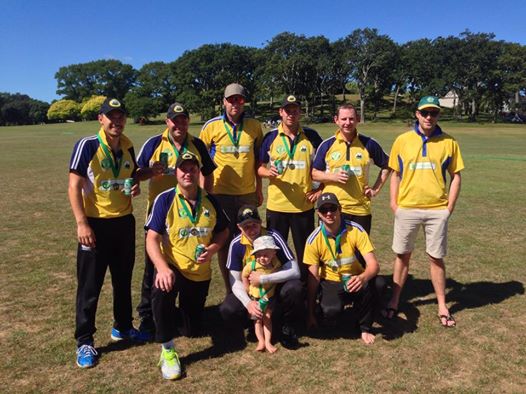 Congratulations to the Cow Tippers who are the NZ Champs for 2015. They receive a $3000 travel voucher towards the next World Champs to be held in Barbados in March2015
The NZ Championships ran on Saturday 17th & 18th January 2015. The tournament was held at the the Auckland Domain with some great weather. Thanks to the umpires who did a fantastic job and without them the event would not be possible. Another thank you to Wild Buck Beer who kept the teams well refreshed during the weekend. More news to follow!

Congratulalations to the Scandanavian Mongoose (green) from the North Shore who won the Plate competition. 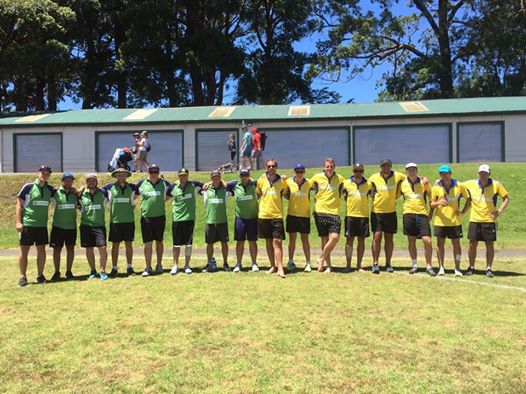 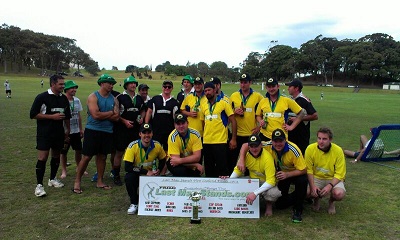 The NZ Championships ran on Saturday 18th & 19th January 2014. 15 teams took part in the tournament, which was held at the the Auckland Domain in near perfect weather conditions. Thanks to the umpires who did a fantastic job and without them the event would not be possible. Another thank you to Wild Buck Beer who kept the teams well refreshed during the weekend as well providing the teams with some great bucket hats!!

The pool stages of the tournament took place on Saturday with the Cow Tippers, Altar Boys, Long Boxes,Rams and Broke Bat Mountain showing early form in finishing top of there groups.Â 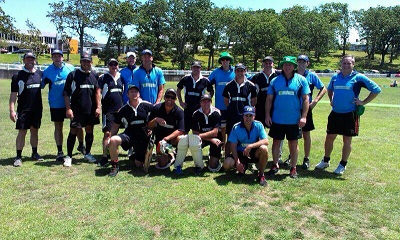 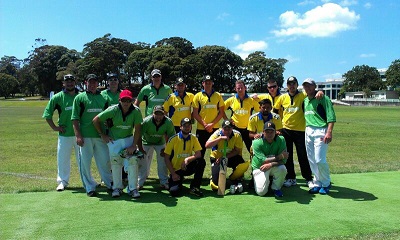 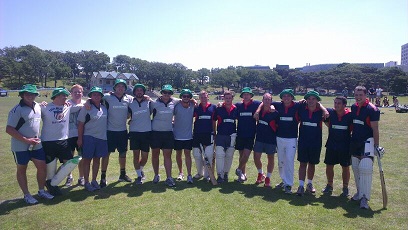 Group A
The Cow Tippers won 2 from 2 with convincing wins against the Salami Army and Team Zone with the stand out performances in the Group from Chris Knight from the Tippers . Â
Group B
Aruguably the toughest of the groups, the Altar Boys who had assembled a strong squad Â for the tourney topped the group with 2 wins and one against the Rampant Stags with the difference between the teams, Dave Rankins knock of 80. The stags then made light work of the Bailers with a massing 200 plus but then the bailers pushed the Altar Boys further then expected. One of the highlights of this group would have to have been Lenny Nikora's (Bailers) one handed catch on the boundary.
Group C
Broke Bat Mountain topped this group with 2 wins and a win against the Few Old Men went a bit against the odds. BBM had an easy win against the Warbury Wasters first up and then the Wasters had an even tougher assignment against the Few Old Men who inflicted some good old chasing of leather in scoring 228 in there 20 overs.
Group D
Rams topped this pool with 2 from 2 with wins against Ben Hurley's Smash Palace and the seasoned veterans and current AKL champs,Top Catch. Jarrod Bear topped scored with 78* against Top Catch which enabled them to post a below par score of 180 and win by 15 runs. The highlight of this pool was Mike Harrods maiden 50 off 15 balls in his career against Smash Palace.
Group E
All 3 teams won and lost one in this group with Longboxes scrapping through on NRR and the Sons missing out on all the clothing BPS. The mervets beat the Longbxes in game 1 an then there was a dramatic 1 run win by the Longboxes over the Sons. Game 3 saw the Sons chase down 200 against the enemy the Mervets.

The 5 group winners and 3 best placed '2nd' teams qaulified for the 1/4 finals. In game 1 the Longboxes nearly chased down the Stags 200 thanks to 115 from 40 balls from Dan Hoddy. Needing 60 off 20 balls he got within a home run of winning the game for his side. In game 2 the Cow Tippers chased down 157 in 18 overs but was not a easy as that with some brilliant catching from Darren Stringer in the outfield ensured the Tippers were loosing wickets at regular intervals with the team dressing room going a bit quiet for a while which is unusual with Brent Batts around. Game 3 saw a thriller between the Rams and Top Catch with Rams needing a home run to win the game but only for the batter to be caught out. Game 4 saw the Altar Boys make light work of the Broke bat mountain unit.
The first semi final took place between the Altar Boys and Cow Tippers. The Cow Tippers posted 215 and with key wickets falling regularly the Altar Boys were bundled out for 92. Top Catch chased down the stags 200 with some clean hitting from Richard Jones and Andrew Hamilton.
This set up a Cow Tippers Top Catch final. With a near faultless batting display from the tippers they posted a massive 238 to win with 3 players retiring at 50. The Top Catch run chase could not have got off to a worse start with Richard Jones getting out in the first over. Hamilton provided some form of resistance but once Jeremy Lane was done by the double play the game was all but over and the Cow Tippers winning by 108 runs and sees them fly to Australia in November to compete for the Australasian Champs title and AUD 8000 towards the next World Champs in Barbados in April 2015. Well done guys. 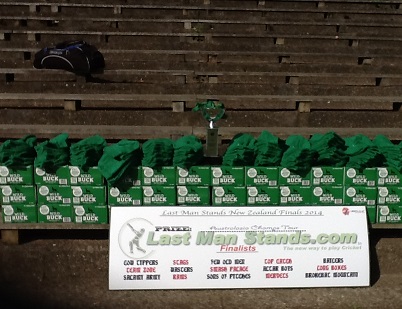 Congratulations to the Sons who now own the Beer Champs for 2014 title. After narrowingly missing out on the main comp they re focused on the $500 bar tab up for grabs. The day started with the Warbury Wasters taking on the Bailers in first of 2 1/4 finals. The Bailers got over the line in this encounter and were one step closer to the title they only care about. In the other 1/4 final the dysfunctional team zone who had high hopes of winning a game this season were unable to get over the line against the Mervets. The Salami Army went about their business with ease against the bailers which saw them into the final

The Sons took on the old foe the merverts in there semi final which they made light work of. The highlight of this encounter was a hatrick by Dave Hutchins. Their next assignment were the Salami Army in the final. The SA chose to bat and were soon in trouble at 50 for 6 but were able to post a very moderate 116. Some tight bowling from the SA saw the Sons somewhat wobble in the run chase but were able to get there in the end with solid knocks from Simon Luke and James Hackett and claim the main prize. Well done guys!! 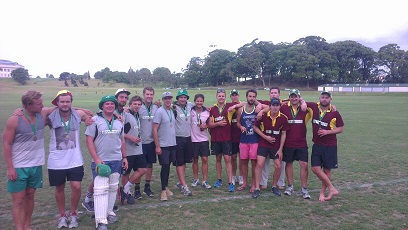 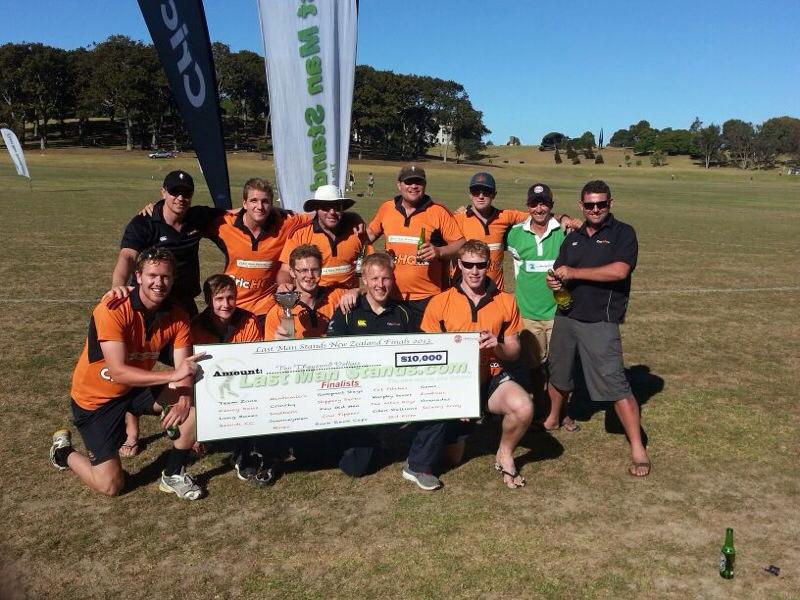 Well done to CricHQ from Wellington (featured above left) - New Zealand National Champions of 2013. They go on to play the South African National Champions at Lord's at the 2013 LMS World Champs opening match! Hard luck to the runners up, Old Firm. Auckland teams watch out for these guys.

CricHQ - The Road to Lord's

2013 Nationals winners, CricHQ entered the local Wellington league this summer and currently top the LMS premier Wednesday grade. Skipper Mark Jurgeleit had been plotting this naionals win for over a year and now they are on route to Lords.

They are arrived at the nationals Â full of confidence and with a very useful unit but quickly realised the level of competition was going to be tough. Their opening group game against the highly fancied Zimboks from the North Shore and was a convincing win and set the tone for the tournament with Crichq chasing down 200 in 15 overs! Neil Martin with 50 (13 balls)

In their second group game they chased down 180 in 17.2 overs against another good side from Wellington, Murphy Sewer. This meant they finished top of Group F and were in the 1/4 finals and drawn against last summers Auckland Champs the Rams who were in some good form after a slow start to there domestic season. The Rams chasing 200 fell 57 short.

The 1/2 final game for CricHQ against the Altar Boys was always going to be a tough one who have some very handy players in there ranks. The Altar Boys deciding to bowl first and realising quickly they were going to be chasing a big total were set 216 to win The Altar Boys got off to a flier and were in the battle for 20 overs but fell 30 short.

This set up the grand final against the Old Firm from the other side of the draw and who were on fire after making light work of NZ's topped ranked team, the Cow Tippers and then the Rampant Stags who seem to run out of fuel after a big 1/4 final win against one the comp favourites, the Fancy Dans.

CricHQ won the toss and decided to field first. This was the first time in the day that the Old Firm were setting a target. They reached a competitive 187 with 50's from Mason Isbey (21 balls) and Ant Bullock (26 balls).The pick of the bowlers for Crichq was Neil Martin with 4-0-28. The Crichq run chase got off to flier with boundaries coming left right and centre but then Old Firm skipper Ant Bullock taking the catch of the tournament on the long off boundary seem to slow the run rate down a bit but then both Simon Baker (25 balls) and Jono Sole (24 balls) reaching there 50's allowed Tim Royall and Jared Sewell to steer the team home in the second last over and claim the $10,000 Cheque.Well done to both teams.

A big thank you to all the teams and especially the travelling teams (Crichq & Murphy Sewer, Wellington & Mantonio's, Chch) who took part in the competition as well as the umpires you all did a fantastic job.